Archive for category: The Killer Cookbook

You are here: Home / Book / The Killer Cookbook 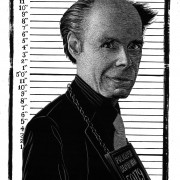 Don’t you just love bones? I know I do. The shape, the feel… the sound! So much fun. And, guess what? You can also find them in some very tasty recipes. Here is one of my favourites.

Salt and pepper the ribs. Heat the oil in a large casserole and brown the ribs slowly in batches so that they’re thoroughly browned. Set them aside.

Drain off most of the oil and drippings, leaving about three tablespoons in the pan. Brown the onions. Add the flour and tomato puree and cook, stirring constantly, for several minutes until uniform in texture.

Return the ribs (and any juices from plate) to the pan. Add the wine, bring to the boil and then lower the heat to simmer.

When the liquid is reduced to about half, add the herbs and garlic.

Add stock and bring to boil, then cover and transfer to the oven.

Bake until the ribs are very tender – about two and a half hours.

Take the ribs out of the pan and put on a serving plate.

Skim the fat from the remaining liquid and bring to a fast boil to thicken on the hob, then strain onto the ribs. 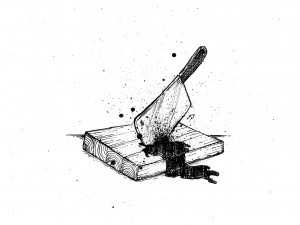 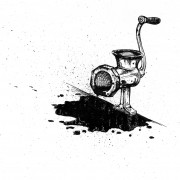 No one who knows me will be remotely surprised that I’ve chosen a recipe with black pudding in it. I love the stuff and have travelled across Europe in search of the perfect plate of pud. I’ve seen it being made in Scotland, Ireland, France and Austria, and eaten it in Belgium, Germany, Italy, Spain and Slovakia.

It’s made from blood for goodness sake! What self-respecting crime writer couldn’t love a dish made from blood? For this particular recipe, I’ve chosen to go with black pudding made from human blood. I know what you’re thinking… too much effort. But it’s actually much simpler than you’d think.

The dish is very much like the classic French boudin noir – but with a twist. The French version is made of one third blood, one third fat, and one third onions. My version is more tartan noir than boudin noir, hence the human blood. Not human fat though, that would be disgusting.

You will need three plastic buckets, each containing equal portions of blood, fat and chopped onions, plus a funnel, a length of intestine and a large pot. Mix the blood, fat and onions together (a word of warning: human blood thickens slightly faster than pig’s blood so make sure you keep stirring it or else it will congeal and you don’t want that), season to taste, then pour the mixture through the funnel into the intestine. It is entirely a matter of personal choice whether you use human or animal intestine but the latter is generally easier to get hold off and much less fiddly.

Keep the intestine moving as the blood mix enters it to avoid lumps or twists, coiling it as you go. Once it is full, tie off the end and drop the coil into a pan of hot – not boiling – water and simmer for about twenty minutes. Et voila! Le boudin tartan noir.

If you are too lazy to bother making it from human blood then my recommendation would be either the fine ready-made black puddings of either MacLeod & MacLeod of Stornoway or Ramsay’s of Carluke.

For the rest of the dish, simply melt a little butter or oil in a medium-sized frying pan and flash fry the scallops for about a minute on each side. Grill or fry the black pudding for a similar amount of time; ideally it will be crispy on the outside and moist inside so that you can still savour the tang of the blood.

To serve, slice up a green apple, or perhaps a pink lady, and arrange on the plate. Place a piece of black pudding on the apple, then a scallop on top of that.

Every dish needs an accompaniment but personally I couldn’t recommend any of those vegetable things that I hear people are eating these days. Instead I would advocate a liberal, yet not excessive, pouring of HP Guinness Sauce. If you feel the need to drink, I’d suggest a glass of Shiraz or a pint of double chocolate stout would go with it nicely. Bon appétit! 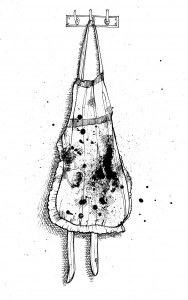 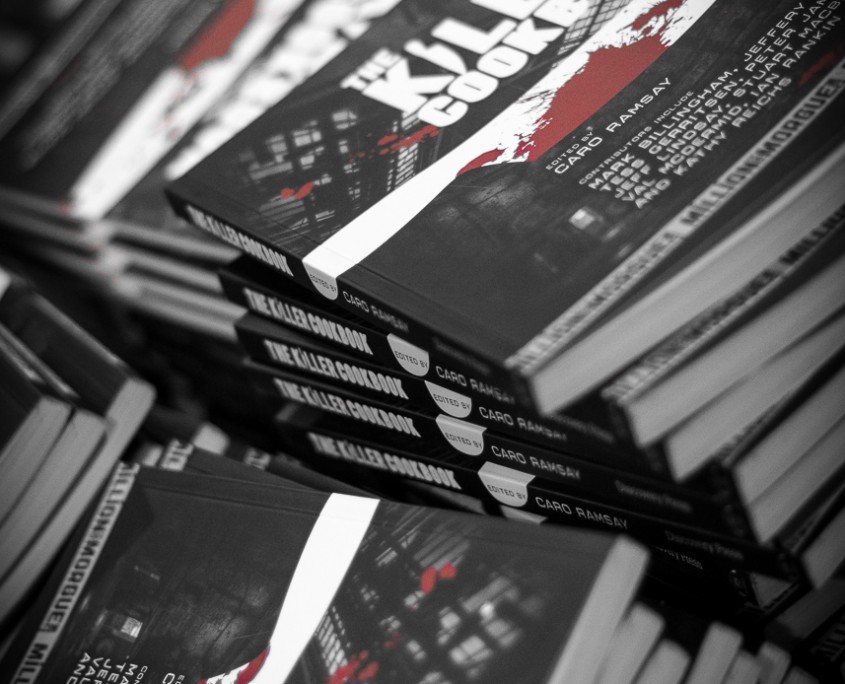 A great time was had at our launch party for The Killer Cookbook at Dundee Literary Festival. Raising funds for the University of Dundee’s Million for a Morgue campaign, a packed house were there to hear the Killer Cookbook ringleader, Caro Ramsay, and her criminal co-horts Russel D. McLean, T. F. Muir  and Craig Robertson discuss food, killing and everything in between. Highlights? Caro Ramsay’s description of one of her villains watching TV eating chips, (it was all in the detail, you don’t want to know where he was keeping the salt) and Craig Robertson’s recipe for human blood pudding (it thickens faster than pigs blood, by the way). Professor Sue Black presented Caro with her very own mug shot courtesy of illustrator Steve Carroll, and then everyone turned to the buffet of sick snacks prepared from the book. Thanks to everyone who came along to make it such a great night.

What a motley crew of contributors we have for The Killer Cookbook, the motliest of whom Steve Carroll has captured in these frankly terrifying mug shots. Check out our rogues gallery… 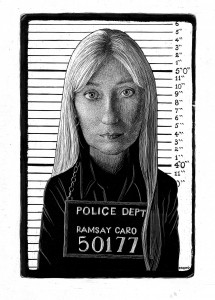 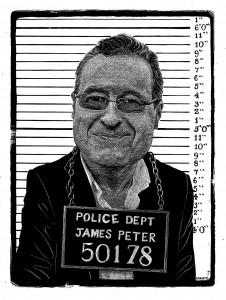 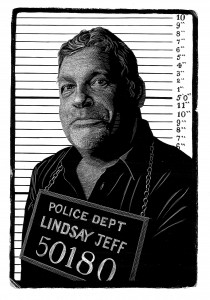 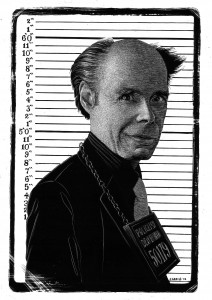 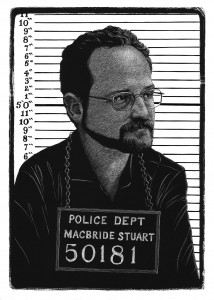