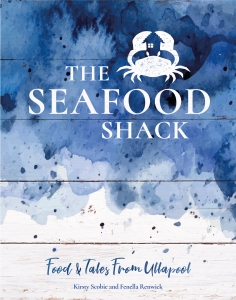 by Kirsty Scobie and Fenella Renwick

In bookshops from November 2020

The Seafood Shack is a sustainable seafood van located in the heart of the small Scottish West Coast village of Ullapool.

The idea for the shack was sparked by a conversation between local lasses Kirsty Scobie & Fenella Renwick when they were out on a boat with their fishermen partners. Ullapool has around twelve local boats: five prawn trawlers and seven inshore creel boats, with a further two crabbing boats coming in each week and ten or so white fish boats landing regularly. That’s a huge variety of seafood coming in daily, but where was it all going? Straight onto the back of a lorry. Why couldn’t you eat this incredible produce locally, fresh from the clear and icy waters of The Minch?

Eager to keep a little fresh seafood for their home town, Kirsty & Fenella launched a crowdfunding campaign and opened up shop as The Seafood Shack. The shack is now one of the foodie highlights of the North Coast 500, serving up whatever their fisherman pals bring them in the morning. Now, in their first book, they bring together all the recipes for the fresh, vibrant, ballsy dishes that have made The Seafood Shack such a Scottish treasure: from their famed Haddock & Pesto Wrap to the super-luxe Lobster Mac & Cheese to incredible super-local delicacies like Spiney Popcorn – it’s all here.